You are here: Home1 / Gabriela Goronzy 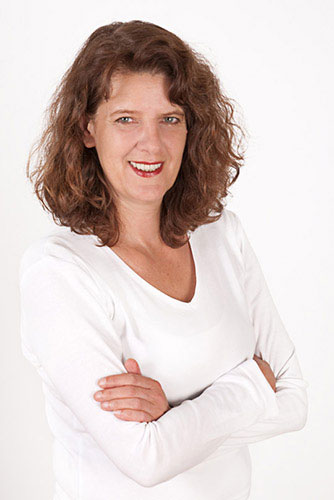 garego Artprints – Art for Everyone!
Gabriela Goronzy’s works deal with the subject of “reflections” and identity,
In direct and associative form.

“With the cultural upheavals brought about by the Renaissance, a new topos appeared in the repertoire of fine arts: the self-portrait.”
“Since then, the self-portrait has run through the history of art like a thread and has become ubiquitous in the form of selfies.”
“The mere question of the individual self-shows a much clearer tradition and finds its earliest striking expression in Europe in the dictum” Gnothi seauton “: Know yourself!, which in the 5th century BC. Ad as an inscription in the vestibule of the temple of Delphi.
The view of the self is placed in the service of world knowledge in the Delphic oracle, on the assumption that the processes in our mind correspond to the processes in the outer world and that the way we order and evaluate things is based on general principles follows. The self becomes the mirror of the world.”

If we transfer this idea to cultural theory, we are suddenly in the middle of the relevant discourse on the interrelated relationship between identity, culture and the environment.”
garego Artprints – Art for Everyone!
“This great world is the mirror into which we must look in order to get to know each other from the bottom up.”, and later William Makepeace Thackeray, in whose Vanity Fair it says: “The world is a mirror from which everyone faces his own face.”
The “Gnothi seauton” has become “Gnothi ton kosmon”, the “Know yourself” to “Know the world”. ”
“Gabriela Goronzy illuminates this area of tension between the perception of ourselves as an individual or part of a group, as a self-sufficient entity or interchangeable piece of mosaic, as an original or a copy, in a very differentiated manner and without a final evaluation.”

All drawings and collages were created in DinA4 format and in the color red, as a key color “red” can be found in the most varied of shades and nuances.

Collages are other works, they also deal with the subject of identity, individual and majority. Info on Gabriela Goronzy

The implementation of all works on canvas gives the works a painterly character, on Alu-Dibond the works correspond to the aesthetics of the drawings and collages. have a look at the shop

2019 – “Liveliness – The Self in the Mirror of the World” Einstellungsraum, Hamburg
2004 – “You should be dancin …” nomad oasis, Golden Pudel Club, Hamburg

This site uses cookies. By continuing to browse the site, you are agreeing to our use of cookies.

We may request cookies to be set on your device. We use cookies to let us know when you visit our websites, how you interact with us, to enrich your user experience, and to customize your relationship with our website.

Click on the different category headings to find out more. You can also change some of your preferences. Note that blocking some types of cookies may impact your experience on our websites and the services we are able to offer.

These cookies are strictly necessary to provide you with services available through our website and to use some of its features.

Because these cookies are strictly necessary to deliver the website, refusing them will have impact how our site functions. You always can block or delete cookies by changing your browser settings and force blocking all cookies on this website. But this will always prompt you to accept/refuse cookies when revisiting our site.

We fully respect if you want to refuse cookies but to avoid asking you again and again kindly allow us to store a cookie for that. You are free to opt out any time or opt in for other cookies to get a better experience. If you refuse cookies we will remove all set cookies in our domain.

We provide you with a list of stored cookies on your computer in our domain so you can check what we stored. Due to security reasons we are not able to show or modify cookies from other domains. You can check these in your browser security settings.

These cookies collect information that is used either in aggregate form to help us understand how our website is being used or how effective our marketing campaigns are, or to help us customize our website and application for you in order to enhance your experience.

If you do not want that we track your visit to our site you can disable tracking in your browser here:

We also use different external services like Google Webfonts, Google Maps, and external Video providers. Since these providers may collect personal data like your IP address we allow you to block them here. Please be aware that this might heavily reduce the functionality and appearance of our site. Changes will take effect once you reload the page.

The following cookies are also needed - You can choose if you want to allow them: